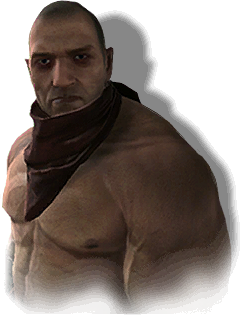 Dmitri is a secondary character in The Witcher 2: Assassins of Kings. A bandit and murderer, he has many tattoos, which are not apparent in his journal image.

Geralt meets him during Troll Trouble quest in Chapter I, at the cemetery of Lobinden, while he is talking with his men of their latest victims. As you can expect, the dialog shortly ends in a fight where this creep finally finds his end.

Looting his remains, Geralt finds a Bandit hideout key and a letter of safe passage, where he can read the involvement of Louis Merse and Bernard Loredo in Dmitri's deeds.

Comparing Dmitri to a Zangwebari hyena would be an insult to the poor animal. Unlike the beast, this scoundrel fed not only on carrion, but also on human and nonhuman misfortune. It was thus that he gathered his blood money.

Even mentioning Dmitri in this story elevates him far more than he deserves, thus let us merely note that the witcher took his life and say nothing more of the son of a bitch.