Dol Blathanna (in Elder Speech meaning the Valley of Flowers), is neighbour to Aedirn and Kaedwen. It belonged to the elves for ages, until humans arrived and laid claim to the land about one hundred years ago, forcing the elves to flee to the mountains. The region was ruled by Filavandrel aén Fidháil, but the elves struggled to survive as they had no knowledge of agriculture; among them was Toruviel.

After Nilfgaard invaded the Northern Kingdoms, Imperator Emhyr var Emreis gave Dol Blathanna to the elves who had aided his cause. He also made Enid an Gleanna the queen of the new elven state, though she still consulted with Filavandrel. After the Peace of Cintra, Enid an Gleanna was forced to swear fealty to Demavend of Aedirn, reorganizing it into an autonomous duchy.

Dol Blathanna is where the short story "The Edge of the World" mostly takes place, chronologically before the war.

The flag for Dol Blathanna is never actually described in the books. This particular flag was based on above COA. 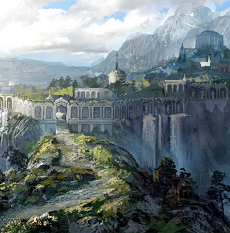 A book available for purchase entitled "The Valley of the Flowers" provides this glossary entry in Geralt's journal.

The game series refers to Dol Blathanna as an independent kingdom rather than an autonomous duchy situated in Aedirn. It is incorrectly located on the map.

In the elven tongue Dol Blathanna means the Valley of the Flowers. Anyone who sees this land with their own eyes would admit to the aptness of this poetic name. Once the southeasternmost province of the Kingdom of Aedirn, it became the sole and sovereign realm of the Free Elves following the last war against Nilfgaard, when Imperator Emhyr var Emreis gave the elves these lands in return for their wartime service. Dol Blathanna is ruled by the elven sorceress Francesca Findabair, known also as Enid an Gleanna, the Daisy of the Valley. It remains a thorn in the side of neighboring realms, even though its queen has been forced to distance herself officially from the guerrilla war waged by the Scoia'tael.