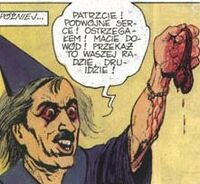 Eltibald was a mage, best known for the Curse of the Black Sun, or by its other name, Mania of Mad Eltibald. He was mentioned in the short story The Lesser Evil.

He investigated menhirs in Dauk on tombstones in Wozgor necropolises, and familiarized himself with the bobolaks' mythology, and came to the conclusion that a certain eclipse would transform sixty of the girls born under it into cruel creatures who, ultimately, would bring about the return of Lilit and the end of the world.

Because of this idea, girls of all social classes, from peasants to royals, were hunted down by certain wizards. Some were killed, some were locked away in high towers. Still others were subjected to autopsy, and at least one to vivisection. Some fled, some became seers, some inflicted cruelties upon others because of the treatment they had received.

What became of Eltibald is not known.

Eltibald is only discussed in "The Price of Neutrality" in relation to the Curse of the Black Sun, a condition which is alleged to afflict Deidre Ademeyn.