The Cult (or Church[1] ) of the Eternal Fire is a religious organization originating from the Free City of Novigrad. Initially a localized cult, in recent times it has started to expand its influences. 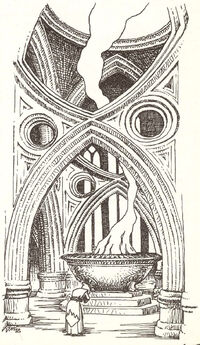 According to a legend, when first human colonists were visiting the abandoned town, they saw the strange glow emanating from one of palaces. Inside they met an individual sitting near the great bowl of fire. Being asked about his personality, he answered: I guard the Eternal Fire; as long as it will flame in this place, so long this city and your kin will endure - and then he disappeared.

The astonished colonists discerned a divine sign in that incident and designated some men to keep an eye on the fire. The Kreve's missionaries who came later acknowledged that the town had been blessed by the presence of their god, and helped organize the church on the model of their cult.

Novigrad was the area's only brick town, so large amounts of people began to settle there. Some of them traded, others dabbled in craftsmanship. In time, non-humans also began to move into the city. Priests were not incommoded as they did not cause harm to the city, paid taxes, and occasionally worshipped the Fire. Only the druids were disliked, accusing Novigrad of polluting the river.

The priests are strongly against the use of magic, as magic might tarnish the location of the Eternal Fire. Sorcery is considered as a blasphemy, with limited approvals granted to individuals that obtained an official permission to practice sorcery or trade imported magical items.

In the 2nd Edition of Wiedźmin: Gra Wyobraźni[]

The Eternal Fire is a symbol of hope, representing the endurance of misfortune, light pointing the way in darkness, the herald of progress, and a better tomorrow. The Holy Flame guards the city from the forces of evil that may threaten its citizens. The primary worry is that any monster could break through the walls, and undermining the faith in the flame is considered blasphemous since it questions the power of the Eternal Fire. Its protection appears extremely effectively , although there is no longer against whom since Novigrad priests enthusiastically eradicated all creatures they considered "monsters".

In game, Geralt first encounters the cult of the Eternal Fire in his meeting with the Reverend in the Outskirts of Vizima. The Reverend, although the religious leader, is only one of many preachers.

Other people the witcher meets in his travels may or may not belong to the cult. Importantly, other religions are portrayed alongside the Cult of the Eternal Fire. These include the Druids, followers of Melitele, the Lady of the Lake and nonhumans, and they in particular do not adhere to the Cult's faith. Our hero also meets worshippers of the Water Lords and of Dagon.

The Eternal Fire is a highly aggressive religious group that fights against all creatures they consider unnatural, including nonhumans, witches, and beasts. Occasionally, even witchers are not welcome in cities that adhere to the Eternal Fire.

The status of the cult has been elevated to the Church of the Eternal Fire, and its practitioners now run the city of Novigrad. In Novigrad, Geralt will frequently come across church officials and street preachers, but also more casual adherents of the fate. Throughout the continent's countryside, members of the church may also be found preaching the fate.

One of the high-ranking Church members Geralt encounters during his quests in Novigrad is the Reverend Nathaniel Pastodi.