Witcher Wiki
Register
Don't have an account?
Sign In
in: The Witcher 2 characters, Humans, Merchants, The Witcher 2 Chapter III
English 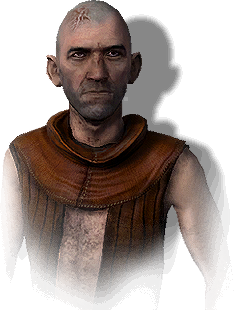 Falas is a secondary character in The Witcher 2: Assassins of Kings. He is a merchant, craftsman, and dice poker player who can be found near Ilona, his wife, outside of the Loc Muinne amphitheatre during Chapter III.

He tells Geralt of how he was once a good swordsmith, or at least it looked like he might be, but a riot came through town taking his workshop with it and leaving him with nothing but his skills. He also professes to prefer swallowing swords to hammering them, but that upsets his wife.

In business, the ability to adapt one's skills is half the battle. After losing his workshop, the former elven sword smith Falas earned his living as a sword swallower. And thought clients were few, Falas still provided reliable services in his former profession.