Following the Thread (The Witcher)

Following the Thread is a quest given to Geralt by Jethro in the Dungeon. Talking to Leuvaarden is not necessary for this quest, but it will provide more background information.

After the reception, Leuvaarden explains to Geralt that he and his secret society need the services of a witcher to pin down exactly where Salamandra is operating in Vizima and what they are up to. They have determined that there are two cells: one in the Temple Quarter slums and another in the Swamp. Maybe one or both of them contain some information or documents of interest. The merchant then advises the witcher to speak with Jethro for more information on the situation in the slums. Great! Slums and cesspools again!

Grudgingly, Geralt goes to the Dungeon and has a chat with Jethro who, in turn, tells him a little bit about a local dealer: Angus. He suggests that the corner near the Hairy Bear would be a good place to find the dealer. Geralt should pay him a visit and see what information he can get from him regarding the source of the drug in the quarter.

At noon, the witcher locates Angus without any problem, exactly where he was expected to be. He approaches the lowlife and asks about fisstech. Angus is immediately suspicious and asks who fingered him as a dealer. 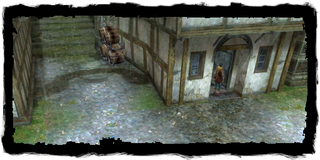 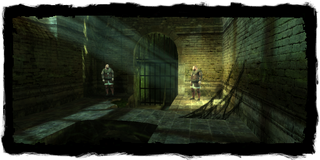 He then goes to one of his favourite recent hangouts, the sewer system of the Temple Quarter. Once inside, he proceeds to the Salamandra hideout. There, he finds two largish bandits guarding an iron gate.

He proceeds to look around and collect useful items as he goes. These Salamanders just leave gold lying everywhere! Having exhausted the possibilities in the other chambers, Geralt finds a room full of chemists busily making fisstech.

The witcher then continues to the deepest chamber of the crypt, intent on finding something to bring back to Leuvaarden. He notices a large chest at one end of the chamber. He moves toward it:

Reaching the chest, Geralt opens it. Amongst all the items inside, he finds a key and a letter (and, if he did not find the Chief Chemist, the Petri's Philter potion recipe is there as well). He then makes his way toward the exit, meeting the City Guards who have entered and are taking care of any stragglers. Once outside he meets Jethro who is waiting for him there.

The jailor is his usual grateful self, which is to say, not! He cavalierly demands that Geralt finish things and get the drug lord, Gellert Bleinheim. But this time, Geralt has had enough and calmly suggests that Jethro stop with the ordering. He also acknowledges that a fisstech junkie will not likely do a very good job of tracking down Bleinheim and agrees (grudgingly) to deal with him.

Investigation in the Temple Quarter[]

I have a letter recommending me to the drug suppliers. It seems I can find them in the sewers. There's a strange word at the end of the letter, something like "th....n". I'm likely to find the suppliers in the sewers. That's where I should go. (1000 XP)