Golden dragons are considered to be the stuff of legends and not real at all. However, there is at least one individual, Villentretenmerth, who can take any shape, including that of Borch Three Jackdaws. He appears in the short story "The Bounds of Reason" in the Sword of Destiny collection by Andrzej Sapkowski.

It is not known whether golden dragons are separate species, or whether they are simply the result of a unique mutation of more common dragons. 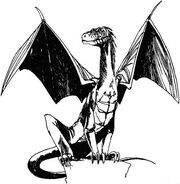 The rarest kind of dragons, considered by most of the experts as the myth. Only a few specimen can be found all over the world. The legends attribute them several miraculous attributes, of which unquestionable are their magical abilities and changing their forms into whichever living being. They belch destructive fire and hot steam. On average they reach 20 meters.

The monthly publication Magia i Miecz ("Magic and sword") by Martyna Tomaszewska wrote that Zerrikania was said to have derived its name from a golden dragon known as Zerrikanterment.