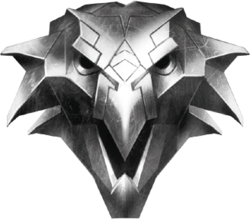 The School of the Griffin is one of three witcher schools mentioned in the graphic novels. It is never specifically described in the books, or the third game. In the books, there is only a fleeting mention of the Griffon school when Leo Bonhart displays the medallions of witchers he has apparently slain. These include a cat medallion, a wolf medallion and a griffon medallion.

In The Witcher 3: Wild Hunt, there is a set of Griffin School gear which can be crafted.

Members of the Griffin School[]