Edit
For the online version, see: The Gwent wiki

“
Gwent is a fast-paced card game that can be played within The Witcher 3: Wild Hunt on every platform. Invented by dwarves and perfected over centuries of tavern table play, Gwent is a game of initial simplicity and ultimate depth, something beloved by both road-weary travelers during long nights around the campfire and elegant nobles looking to liven up dragging dinner parties. The game is about the clash of two armies locked in mortal struggle on a battlefield where the players are the leaders and the cards their forces. With [five] different factions offering unique combat styles and endless paths to victory, Gwent is every adventurer’s first choice when it comes to one-on-one card-based dueling. Take risks and think on your feet, strategize and deliver cunning combos, use potent magic and mighty hero cards and be the last one standing on the field of honor!
”
~ thewitcher.com News, introducing the game

On June 15, 2016 CDProject announced the development of a stand-alone Gwent: The Witcher Card Game. GWENT will be available at release for Xbox One, PC and PlayStation 4, GWENT is a free to play game that puts you, not your cards, in the center of the action. [1] Closed beta started in October 2016 for Windows and Xbox One. On May 25, 2017 CDProject announced the start of Public Beta of the game. [2]

Gwent is an ancient dwarven game that simulates the clash of two armies in battle. The players are generals, and the cards are their forces. Gwent players use their own customized decks. You can build one deck for each of the five Factions - Nilfgaard, Northern Realms, Monsters, Scoia'tael and Skellige. Each faction features a number of unique cards that encourage a different style of play. Each Faction also has a faction perk: 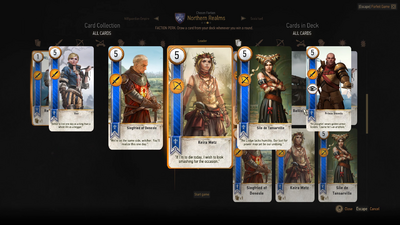