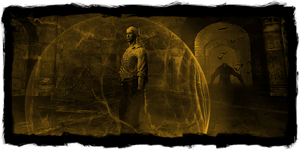 The Heliotrop Sign is a simple magical sign used by witchers. It is made by crossing one's wrists, and works as a buffer against strong physical and magical attacks. Geralt uses this sign in the short story "A Grain of Truth" to cushion the impact of the wall when Vereena uses a sonic attack against him.

“
The wave of sound hit the witcher like a battering ram, depriving him of breath, crushing his ribs, piercing his ears and brain with thorns of pain. Flying backwards he just managed to cross his wrists in the Sign of Heliotrop. The spell cushioned some of his impact with the wall but even so the world grew dark and the remainder of his breath burst from his lungs in a groan.
”
— pg(s). 63 – 64, "A Grain of Truth", in the collection The Last Wish (UK edition)

He also uses the sign to protect himself (somewhat more successfully) from Yennefer when they first meet in the short story "The Last Wish".

“
He immediately regretted his sarcasm. The woman raised her hand and a golden streak shot out from her fingers. Geralt reacted instinctively, crossing both hands in the Sign of Heliotrop, and caught the spell just in front of his face, but the discharge was so strong that it threw him back against the wall. He sank to the floor.
”
— pg(s). 226, "The Last Wish", in the collection The Last Wish (UK edition)

Other time when he uses this sign is while a vigilosaur is attacking him in "Season of Storms" novel.

Heliotrop works as a shield against charms, spells, sounds and other energies directed towards it, but is useless against purely physical attacks.

Heliotrop Sign is the ultimate skill (Sense of Magic) on the Magic tree of Geralt's skill set. To use it you must fill the adrenaline bar by using any of the other Signs. Once the bar is fully charged, activate the Sign by pressing

(by default); adrenaline will reset to zero. The Heliotrop Sign creates a temporary immobile circular force-field area around Geralt, which considerably slows down everything inside the field except himself.