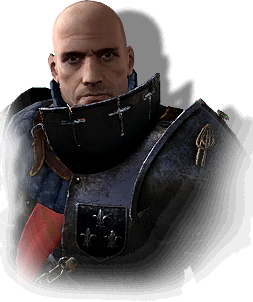 John Natalis was the commander-in-charge of the Northerners at the Battle of Brenna, one of the most famous battles of the Nilfgaard Wars.

John Natalis never physically appears in the original game, but a square is dedicated to him in the Trade Quarter of Vizima. Geralt can visit it during Chapter III.

Constable John Natalis is a secondary character in The Witcher 2: Assassins of Kings. He leads the Temerian delegation at the talks in Loc Muinne.

It seems that every other person you meet took part in the last war against Nilfgaard. Such are the times in which we live. Yet we best remember those who made their mark in the annals of that conflict. John Natalis, Constable of Temeria, is one such person. Supreme commander of the cumulative forces of the North at the Battle of Brenna, Natalis fought valiantly, commanded wisely, and contributed vastly to the victory, despite being outnumbered by the enemy two-to-one. And he did not rest on his laurels after the battle. Instead, he pursued the foe, routing him nec nuntius cladis or nerly so, leaving but a few stragglers to flee beyond the Yaruga. John Natalis was honored richly for his deeds, and a square in Vizima now bears his name.

After Foltest's death, Natalis temporarily served as a regent of Temeria.

If Geralt chooses to rescue Triss:

As a patriot and a soldier, he was the ideal, apolitical candidate for the position of interrex. These same traits, however, meant that he lacked the support of powerful nobles and thus could not speak with a united voice for Temeria as a whole.

If Geralt chooses to rescue Anaïs and not to give her to Radovid V:

Natalis had fought many battles, but the one he fought for Temeria's independence at the summit in Loc Muinne was surely his most challenging. With King Foltest's daughter as his ward, he gained the chance to preserve the sovereignty of the state he temporarily governed.

In The Witcher 3: Wild Hunt, there is a gwent card with his image.