Witcher Wiki
Register
Don't have an account?
Sign In
in: Fortresses, Comics locations, The Price of Neutrality locations,
and 4 more
English

Kaer Morhen is an old keep where the witchers used to be trained. The name is a corruption of the Elder Speech Caer a'Muirehen, which means Old Sea Keep due to the presence of fossilized sea creatures embedded in stones of which it was built. It is located in the mountains of the kingdom of Kaedwen, on the Gwenllech.

In older times, witchers trained and underwent mutations here, but fanatics who considered witchers an abomination attacked the keep and killed most of the teachers. Currently only Vesemir lives in the keep, although some other witchers sometimes rest here between their assignments, often during the winter.

“
From there they could see the ruins of Kaer Morhen huddled against the stone precipices - the partially demolished trapezium of the defensive wall, the remains of the barbican and gate, the thick, blunt column of the donjon.
”
— pg(s). 51, Blood of Elves (UK edition)

“
Clouds sped across the sphere of the moon, momentarily illuminating the great castle, drenching the moat and few remaining walls in a pale glow undulating with shadows, and revealing mounds of skulls baring their broken teeth and staring into nothingness through the black holes of their eye sockets.
”
— pg(s). 38, Blood of Elves (UK edition)

Years ago a horde of fanatics, their hatred incited by various publications defamatory to witchers, such as the Monstrum, laid siege to Kaer Morhen. The mob could not have captured the fortress nor later laid it to ruin without the help of mages. Practically all those who were in the old fortress during the assault perished. From among those witchers who called Kaer Morhen home, only a few survived the massacre, due only to the fact that they were not present at the time.

“
"Kaer Morhen," Triss said as she guided the horse towards the shattered arcades, "was assaulted. There was a bloody battle here in which almost all the witchers died. Only those who weren't in the keep at the time survived."
”
— pg(s). 51, Blood of Elves (UK edition)

The castle can only be reached by The Witchers Trail, which is easy to miss, and encircles the keep. It is often given a different name by young Witchers: The Killer.

“
(...)this was definitely the Trail, a path encircling the old castle of Kaer Morhen and beset with obstacles, where witchers trained to improve their running speeds and controlled breathing. The path was known as the Trail, but Triss knew young witchers had given it their own name: The Killer.
”
— pg(s). 47, Blood of Elves (UK edition)

Witchers of the Wolf School[]

The keep of Kaer Morhen and the surrounding valley are fully explorable in The Witcher 3.[6] The geography of the area, while more fully fleshed-out, is faithful to the original game, including the interior of the keep which has preserved the same floorplan.

The Keep of the Sea of Yore, home to the witchers of the Wolf School. 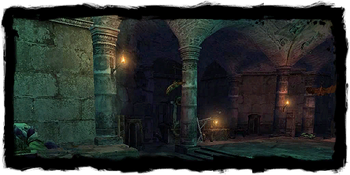 The game's prologue is set at Kaer Morhen. In the opening sequence of the game, Geralt is found unconscious and suffering from amnesia just outside the fortress. Having barely recovered from his mysterious injuries, the witcher finds himself and his companions under attack, and so begins the story.

Kaer Morhen is an inaccessible mountain stronghold which has been the headquarters of the witchers' guild for centuries. The name comes from the language of the elves — the original Caer a'Muirehen translates into Old Sea Fortress. The castle's time of greatness has passed, the battlements and moat have deteriorated, and a cold wind blows through the spacious halls. Currently only a handful of witchers live here, but once many young boys underwent gruesome training along the infamous "Gauntlet" near Kaer Morhen.

The premium module "The Price of Neutrality" is set in and around Kaer Morhen. The outer courtyards of the keep are where Deidre Ademeyn, a princess allegedly affected by the Curse of the Black Sun has taken refuge, aided somewhat by the witchers wintering there: Vesemir, Lambert and in particular, Eskel.

Kaer Morhen is an inaccessible mountain stronghold which has been the headquarters of the witchers' guild for centuries. Its name derives from its original elven appellation — Caer a'Muirehen, meaning Old Sea Fortress. The castle's times of glory have passed, its battlements and moat have deteriorated, a cold wind blows through its spacious halls. Only a handful of witchers live here now, but in past times droves of young boys underwent gruesome training along the infamous "Gauntlet" near Kaer Morhen.

Years ago a horde of fanatics, their hatred incited by various publications defamatory of witchers, laid siege to Kaer Morhen. The mob would not have captured the fortress nor later turned it into a ruin without the help of mages. Practically all those who were in the Old Sea Fortress during the assault perished. From among those witchers who called Kaer Morhen home, only a few survived the massacre, merely because they were out on their Paths at the time. The bones of the dead remain at the bottom of the moat surrounding the stronghold, left there as a reminder of the massacre that was born from hatred directed against changelings.