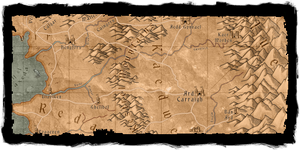 The Kestrel Mountains are a range which separates Kaedwen from eastern regions of Kovir and Poviss (currently Hengfors League). They lie to the west of Kaedwen. Also westward, but more north is another mountain range: the Dragon Mountains. Several rivers run through the range as well, including the Buina, the Braa (which rises between the Kestrel and Dragon mountain ranges) and the Nimnar.

There are three major peaks in the northern part of the range:

CD Projekt RED on their map decided to highly expand the size of mountains - it forms the border between Redania and Kaedwen. There is no single mention in the books which could support it though.