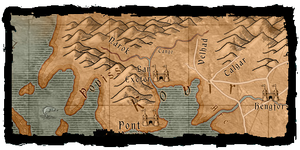 Lan Exeter is winter capital and a major port city in Kovir. The summer capital is Pont Vanis. The city is located on a bay in the Gulf of Praxeda in the North Sea at the mouth of the Tango, where it into the gulf. The city has no streets, local navigation is accomplished via the Great Canal and other, smaller canals.

The Grand Canal leads directly from the port to the royal residence, Ensenad. Along the way, the canal is flanked by the palatial estates of the admiralty and local business magnates, not to mention many grand, though narrow homes. The narrowness of these estates and mansions being due to the onerous tax placed on canal frontage.

A well-known personality in the city is the mage, Carduin, one of council members of the Brotherhood of Sorcerers during the Thanedd coup.

In The Tower of the Swallow, Queen Zuleyka mentions that the sorceress Sheala de Tancarville is staying in the city.