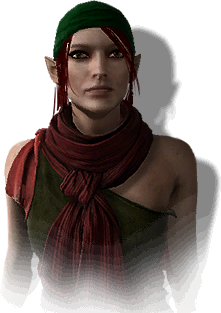 Malena is a secondary character in The Witcher 2: Assassins of Kings.

Like many non-humans in Flotsam, she works as a servant for humans. Geralt meets her when she is being harassed by Loredo's men, accusing her of being a Scoia'tael and responsible for the murder of their companions. If Geralt decides to interfere in the conversation and listen to Malena, she brings them to the entrance of a cave west of the pier, asking the witcher to find the corpses and some evidence on them. After exploring the cave it is revealed that Scoia'tael did indeed murder the soldiers. Malena's fate is in Geralt's hands and it is up to the player to decide what to do.

Life was not easy for the nonhumans of Flotsam, and Malena was no exception. The elven woman was suspected of leading soldiers into Scoia'tael ambushes, a charge that could easily send her to the scaffold.

If Geralt decides to not interfere when Loredo's men accuse Malena:

The witcher decided not to interfere. Malena was arrested and charged with being an accessory to murder. Her fate was easy to predict.

If Geralt decides to defend Malena against Loredo's men:

The elven woman had indeed been luring soldiers into a trap. Her fate was now in Geralt's hands.

If Geralt decides to tell the truth about the corpses in the cave:

Malena was arrested and charged with being an accessory to murder. She suffered the consequences of her deeds.

If Geralt decides to lie to Loredo's men, saving the girl:

If Geralt decides to lie to Loredo's men and then kills the girl:

Though the witcher did not reveal her complicity in the murders, the elven woman could not trust him. This led her to repay him with betrayal. For this Malena paid the ultimate price.