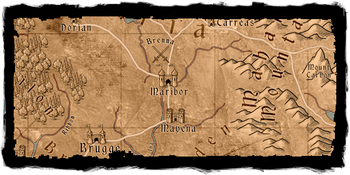 Maribor is the second largest city in Temeria and capital of duchy by the same name, located about 200 miles south of Vizima and roughly 42 miles west of Zavada. Like Vizima, Maribor was built on elven foundations; the town was later half destroyed by the viy created by Alzur the mage. The famous field where the Battle of Brenna took place on is located north of Maribor.