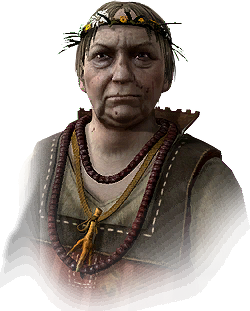 Marietta Loredo is a secondary character in The Witcher 2: Assassins of Kings.

Marietta is Bernard's mother. Geralt meets her only once before the final challenge with her son (if he chooses Roche's path), under rather mysterious circumstances. Apparently, she is the one who "takes care" of Rupert and Gridley, if Geralt decides that they were both guilty and does not give them to the Nilfgaardian spirit, in the "In the Claws of Madness" quest. We do not know for sure why she is so interested in taking care of them, although it is suggested that she might have been the young woman who escaped from the asylum in the Flotsam forests all those years ago.

Later on, if Geralt chooses Roche's path, it turns out that Marietta is just as creepy and perverted as her son, Bernard. She is a freaky hag who manufactures fisstech in the basement of the estate. In her room, Geralt finds a disturbing version of the god Veyopatis which she worships. She appears to live in a world of her own, of dark magic and madness, from which she will finally find release at the hand of a witcher.

Having met the commandant of Flotsam's town watch, I did not expect his mother to be a charming old lady always prepared to treat her guests to fruit tarts. Yet Geralt's experience with the hag destroyed any illusions I may have still harbored regarding Loredo's family. Marietta proved to be a drug-addled creature living in her own world of madness and hatred. Thus, I think it may be for the better that she is no longer among the living.

To Geralt's surprise, Loredo's mother, Marietta, proved to be the same woman who had taken Rupert and Gridley away earlier. All the pieces of the puzzle thus fell in place, for she was probably the inmate they had mentioned as being the sole survivor of the fire. Since that time Marietta had lived in her own world of madness fueled by narcotic visions. The witcher's blade finally brought her suffering to an end.