Merchant Street is the market area in the Temple Quarter where you can easily buy and sell items of all kinds. It occupies the north-east corner of the Quarter. The central architectural feature would be the statue of the aesculapian snake. There are four merchants which can be found there regularly. 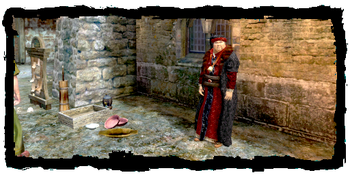 in Chapter I. He is very friendly and the earliest to arrive in the mornings, as well as the last to leave at night (if he actually leaves at all!). He can be found daily from 06:00-23:00, but his business hours are shorter — he will not sell before 07:00. 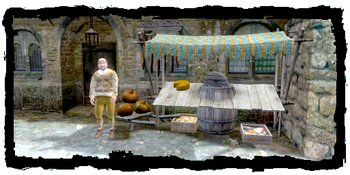 He looks just like Butter Bean. He is not as talkative as the Peddler, but he is there to trade, and trade he does. The peasant trader is the first to leave in the evenings, leaving at 18:00, but he does arrive early in the mornings. 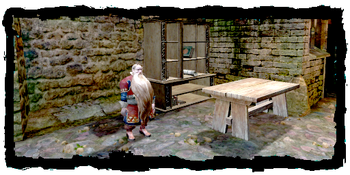 He seems to be the merchant with the best sense of humour on the street, but he is the latest to arrive in the mornings and one of the first to leave in the evenings. His knowledge of books is impressive. He can recall the smallest details off the top of his head, not to mention the location of books he does not own yet. He looks just like Munro Bruys and can be found daily between the hours of 09:00 and 21:00. 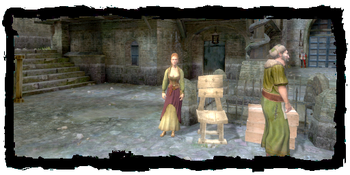 She buys and sells

The Herbalist is quite cagey about where she gets her merchandise, but she can be persuaded. She will tell Geralt about gathering herbs by moonlight in the swamp in exchange for a Red shawl. She keeps fairly standard hours, daily at the market, but beware, she does not give the best prices when selling herbs.