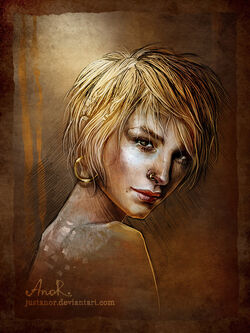 Mistle was one of the members of the Rats, she was a tall, long-legged girl with short, straw coloured hair. Mistle came from a wealthy noble family from Thurn. She survived a brutal rape at the hands of Nilgaardian soldiers and was left for dead. She was found by Asse who had been following the same troops seeking revenge for the murder of his family. She was the first of the Rats to show Ciri some compassion, eventually becoming her lover. She was killed at the hands of Leo Bonhart.

“
The tree stump was followed by a young woman with close-cropped fair hair in a red doublet and high, shiny boots reaching above the knee.
”
— pg(s). 311, Time of Contempt (UK edition)

“
Mistle came from a wealthy, noble family from the city of Thurn in northern Maecht. Her father, a vassal of Duke Rudiger, joined the insurrectionary army, was defeated and vanished without trace. When the people of Thurn were escaping the city from the news of an approaching punitive expedition by the notorious pacifiers of Gemmera, Mistle's family also fled, but Mistle got lost in the panic-stricken crowd. The elegantly dressed and delicate maiden, who had been carried in a sedan chair from early childhood, was unable to keep pace with the fugitives. (...)
”
— pg(s). 326, Time of Contempt (UK edition)

Other members of the Rats[]