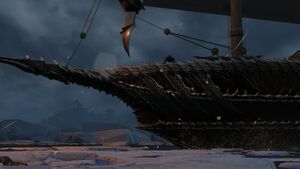 the Naglfar in The Witcher 3

The Naglfar is a demonic vessel which is said to be built by demons from the finger- and toe-nails of the dead. The vessel is said to sail from Mörhogg, the land of Chaos, to the land of the living carrying an undead army which will wage the final battle of good and evil known as Ragh nar Roog.

To this day, Skelligans also cut the nails of their recently deceased in an effort to minimize the building materials available to the demon builders.

The Naglfar: the Longship Made of Deadmen's Claws is the vessel used by Eredin and his Wild Hunt warriors.

The ship and its army of undead are featured in the December 7, 2013 trailer for the upcoming final chapter in the game trilogy.