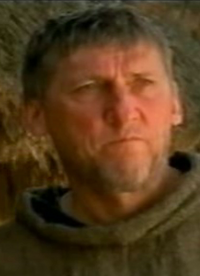 Nettly, a peasant from Lower Posada in Dol Blathanna. He caught up with Geralt and Dandelion in his cart, and said he had work for a witcher. He appears in the short story "The Edge of the World".

“
They weren't riding fast and the empty cart, drawn by two piebald horses, quickly caught up with them. 'Woooooaaaaahhhh!' The driver brought the horses to a halt just behind them. He was wearing a sheepskin over his bare skin and his hair reached down to his brows. 'The gods be praised, noble sirs!'
”
— pg(s). 168, "The Edge of the World", in the collection The Last Wish (UK edition)

He was played by Waldemar Czyszak in episode 7, Dolina Kwiatów, of The Hexer TV series.