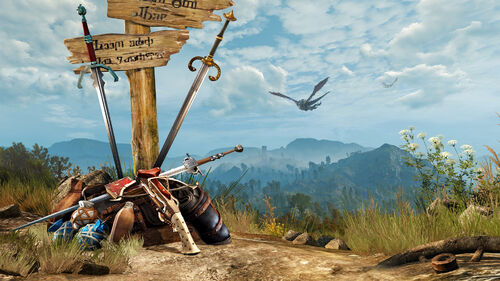 New Game + is an unlockable game mode for The Witcher 3: Wild Hunt. It is one of 16 free DLCs available for the game, released on August 17, 2015 [1]. It allows players to restart the game and except for the tutorial section, retain all their gear, food, crafting/alchemy ingredients and gold. Quest items, books, trophies, crafting diagrams and formulae are not retained.

Suggested difficulty levels for quests are scaled up by at least 25 levels, as are the levels of the monsters encountered. New level requirements for quests, enemies and equipment depend on the level you had when finishing the game. If you were level 25 at the end of the story, the upscaling is 25 levels. If you were level 35, the upscaling is 35 levels. All new Witcher gear and diagrams are "Legendary".

Hungry for more action? Start a new game with all the skills and items from your previous playthrough, get better loot, slay even more ferocious beasts and relive the epic fantasy adventure that is The Witcher 3: Wild Hunt!

You can start a NEW GAME + from the Game Menu after finishing the main storyline. If you finished the main storyline before installing this content, you need to load a save made after completing the game and re-save it for it to be eligible for use with NEW GAME +.