The Empire of Nilfgaard is the most powerful realm in the history of the known world. Located in the southern part of the Continent, it boasts a thriving economy and strong, well-trained armies with talented commanders. Although populations of the North refer to all followers of the Empire as Nilfgaardians, the Empire's inhabitants believe that the "real" Nilfgaardians are those born in the heart of the Empire, and not those from conquered provinces. Northerners also pejoratively refer to members of its military as Black Ones. Its state religion is the cult of the Great Sun.

The Empire's provinces are ruled either by stewards from native Nilfgaard or kings (having willingly surrendered) who retain their throne and pledge allegiance to the Emperor. It has expanded aggressively throughout the centuries, subjugating the principalities and kingdoms of Ymlac, Vicovaro, Rowan, Etolia, Gemmera, Maecht, Ebbing, Geso, Metinna, and Nazair. During the first Northern War, it conquered Cintra and the duchy of Attre. By the time of Imperator Emhyr var Emreis' reign, its borders had reached the Yaruga River.

In the Witcher saga, the Empire is portrayed as an overarching antagonist, with many free peoples of the North expressing hatred towards it with passion. It is introduced in Blood of Elves, when it invades Cintra. Nilfgaard draws many parallels with the real world Roman Empire: an expansionist realm with disciplined armies that practiced slavery, whose subjects held sentiments of cultural superiority.

“
One inch above the cross guard, he saw a punch in the shape of the sun in its glory with sixteen rays, alternating straight and wavy, symbolising heraldically the light and heat of the sun.
”
— pg(s). ???, Season of Storms

The Great Sun, symbolizing solar radiance and solar heat, is the primary symbol of the Nilfgaardian people. It appears in imperial heraldry, on coins, banners of armed forces as well as the mark of the Viroledan swordsmiths.

The first coat of arms was created by our member SMiki55. The second one, by SMiki and Ruttou, is based on an illustration from Czech edition of the Saga. The third comes from CDPR's The Witcher game series.

These flags were created by SMiki55. 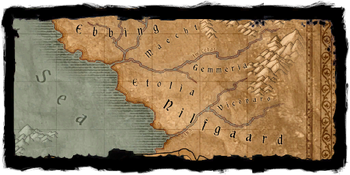 "The Nilfgaardian Empire is a powerful and ancient realm in the far south. Its capital is the city of Nilfgaard, located on the river Alba. The Empire arose through conquests, assimilating nearby kingdoms. Only the inhabitants of lands near the river Alba have the right to call themselves Nilfgaardians. A significant amount of elven blood runs in the veins of the people, while their language is a variant of the Elder Language. The Empire is aggressive and willingly invades neighboring lands. Its war with the Northern Kingdoms ended five years ago, yet in spite of the peace treaty, Nilfgaard has failed to give up its claims on the northern territories."