Nilfgaardian Garrison is a location in The Witcher 3: Wild Hunt. It is presumably a ruined fort most probably used by Temerians during the Third Nilfgaard-Nordling War to guard the Ismena river, before being taken over by the Nilfgaard army after their victory at the battle of White Orchard between the Crossroads and Cackler Bridge. It is now controlled by the commanding officer, captain Peter Saar Gwynleve.

It is located at the northwestern-most area of White Orchard. It is built atop a hill surrounded by a swamp on its south, and the river on the north and its sides. Its collapsed bridge, used to cross the river, may have been connected to a road towards Houtborg in the north. 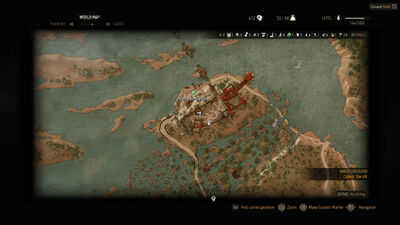