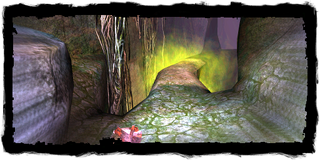 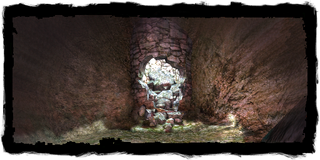 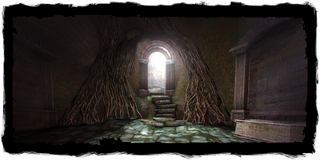 The Old Manor catacombs are (not surprisingly) located under the Old Manor. Sarcophagi and scattered human remains still litter the place, along with sewant mushrooms. Time has not stopped here, either, and the rocks and rubble have cut off some of the passages. Alas, some of the dead refuse to remain that way, and wraiths, vampires and necrophages of all kinds eagerly greet anyone who sets a foot inside.

But even those did not stop Salamandra from sneaking in to claim this no-man's-land for their own, and letting the mutants, the results of their experiments conducted in the laboratory, run loose.

Depending on the path Geralt has chosen at this point, he will enter the catacombs with the help of either Yaevinn, Siegfried or Triss and the entrance itself will vary (see the map below). There are also strategically locked doors or caved-in areas which force the witcher take a particular (a unique) path from his start point to his ultimate goal: the laboratory.