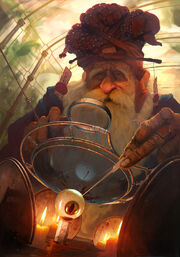 Grandmaster Ortolan is a living legend and the mage, who was in charge of the experiments done at Rissberg castle.

He was one of the eldest and most famous mages he was actually the one who invented the elixir inhibiting the aging process. The elixir, however, preserved Ortolan from death but couldn't return his own youth - he invented it when he was in really advanced age. Although the sorcerer intended to give the immortality to the commons, he was deceived by the Brotherhood, which kept the formula secret, deluding him that the whole humanity is non-aging and absolutely happy.

Apart from it, he was also an inventor of, among other, eye-regenerating formula and a bunch of weapons. He was of the opinion that the best way to prevent humanity from terror of war is deterring by terrible weapons - the more lethal weapon, the more certain peace. Since Ortolan not used to heed the arguments, the Brotherhood hid in his inventive team the latent saboteurs who paralyses the dangerous inventions. One of exceptions was the infamous bullet thrower, kind of telekinetic arbalest with the huge spherical storage for lead bullets. As the name suggests, it used to throw the bullets, in several rounds per minute. Its prototype was tested in some minor battle and wasn't bring into general use due to very low accuracy.

Ortolan defended the affair of Geralt and Yennefer among the Brotherhood and used to be friendly to the witcher, until he learned that the white-haired monster slayer had killed IDR UL Ex IX 0012 BETA, a product of genetic engineering by Idarran, a renegade mage, who was held in high regard by Ortolan.

He advised Sorel how he could catch Geralt in a trap and planned to examine the structure of the witcher's eyes - but without killing him, because he was unable to harm "Little Yennefer". The old mage even planned to bring Geralt his eyes back, when he would refine the eye-regeneration process.

The grandmaster died of a stroke at the news of Sorel's death. The official version is that he was poisoned by the fertilizer he worked on.