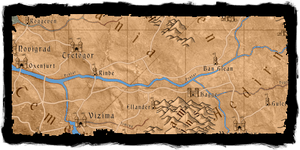 The Pontar, known by the elves as Aevon y Pont ar Gwennelen (River of Alabaster Bridges), is one of the largest rivers in the Northern Kingdoms. It serves as a natural border between Redania and Kaedwen to the north, and Temeria and Aedirn to the south. It rises in the Blue Mountains and splits into two branches slightly downstream of the outlet of Chotla; its southern branch is called Embla. The branches connect again somewhere after Windley; this particular region is full of dangerous offshoots, oxbows and swamps. Further downstream, it forms an Delta and empties into the Great Sea near Novigrad.

The area in the vicinity of the river is also known as the Pontar valley or simply, "Pontar".