The Poor Fucking Infantry, or PFI was a Northern infantry division, consisting of conscripts and volunteers that lacked any relevant combat, riding or archery experience. It recruited in Vizima during the war with Nilfgaard and it is there where Jarre and Melfi joined its ranks.

The PFI took part in the Battle of Brenna, under the command of the voivode Bronibor. Initially held in reserve, it was assigned to stop the counter-charge of the Nilfgaardian Nauzicaa and 7th Daerlanian brigades. Consisting primarily of inexperienced pikemen matched against the enemy's cavalry the PFI sustained heavy casualties in the clash, Bronibor included. It did manifest a surprising valor however and managed to hold its ground.

Geralt can overhear guards saying: "I served in the PFI under General Bronibor during the Battle of Brenna" in the Temple Quarter. 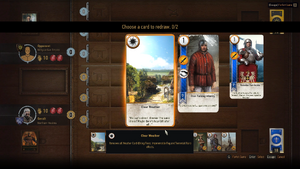 There is a Gwent card with its name. It has almost the least power available - just "1".