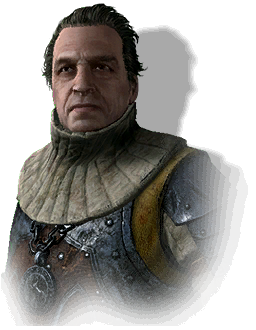 Proximo Woodblade is a secondary character in The Witcher 2: Assassins of Kings. You can meet him in Chapter II, at the Kaedweni camp, if you chose to side with Vernon Roche.

Proximo is responsible for the fighting in the arena, which is a form of entertainment which very much pleases King Henselt. He is also responsible for the reward offered in the announcement hanging on the Notice board for getting rid of the Rotfiends which plague the areas around the camp.

Proximo, the arena master, had a talent for oration and the fights he organized were famous in all of Kaedwen and beyond. Blows rained down, armor fragments and teeth flew left and right – in other words, the audience found his arena to be equal to the merry dancing of a fair day.