The Ransacked Village is a location in The Witcher 3: Wild Hunt. This is the first settlement Geralt and Vesemir passed through when they reached White Orchard after riding through the battlefield and the crossroads nearby.

There are six houses, two of which were completely burned. Thirteen villagers left and mourning, including four children. If Geralt stopped and went around the village, when he was riding with Vesemir, he would later encounter wandering wolves attacking some of the villagers at the west of the village adjacent to the bandit camp nearby. Below the cliff, at the south of the village are drowners eating the corpses of the humans they attacked while they were burying a chest on the beach.

The river south of the village is the Ismena river. Although there is a broken boat on the beach, there are no fishing docks to infer that they were a fishing village since it is also infested by drowners.

Northwest of the village, where the bandit camp lies, is a fortress called Amavet. This is where the witcher Kolgrim of the Viper School was detained after being allegedly accused of kidnapping a boy. It is unclear whether this was also used to overlook and govern the village, or is older than it and thus guarded the road to the White Orchard village. However, the latter seems more plausible since it is in complete ruin, and plants and roots were already growing all over it.

A band of soldiers attacked this village early one morning. They slaughtered most of the villagers in their beds, and the lucky few who fled to the woods in time had nothing left to return to. 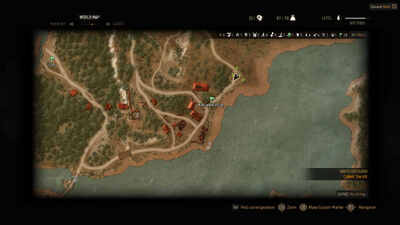