Witcher Wiki
Register
Don't have an account?
Sign In
in: The Witcher 2 characters, The Witcher 2 Chapter II, Humans, Merchants
English 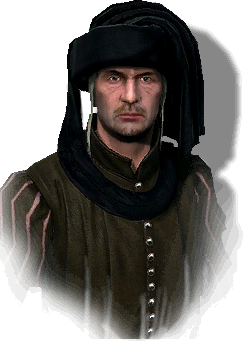 The Relic peddler (referred to as "Relic seller" in the journal heading) is a secondary character in The Witcher 2: Assassins of Kings. He is a merchant and dice poker player who can be found in the Kaedweni camp canteen during Chapter II.

He claims to sell "relics, artifacts, trinkets and talismans — hallowed and highly valuable" but his actual inventory is far less impressive.

Business, as a certain halfling would say, must keep rolling, and nearly anything can facilitate this. Wondrous amulets, invisibility caps and pornographic scenes carved in cedar wood always sold well on market days, during fairs and in military camps. Benefiting from the popularity of Sabrina's cult, a certain enterprising man had begun selling relics from the site of her execution. The demand for protective amulets always grows before a battle, so this individual did not lack for customers.

He was selling shiny new nails and in numbers great enough to nail up every participant in the Thanedd summit, but those were trifling details. As long as both buyer and seller are happy, who cares?