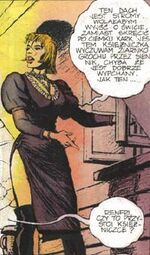 Renfri was a princess and the daughter of Fredefalk, the duke of Creyden, and the stepdaughter of Aridea. She is depicted as a more brutal version of Snow White.

Renfri was born just after a much prophesied eclipse known as the Black Sun. Girls born during the eclipse were said to be afflicted by a curse which turned them into vicious monsters, and this worried her stepmother, who contacted the Council of Wizards. One of them went to Creyden, and performed tests, observed the girl as best he could without drawing Fredefalk's attention. He came to the conclusion that the girl was indeed cursed, and along with Aridea, they planned to get rid of her.

A huntsman was supposed to take the girl into the woods, kill her and bring back her heart and liver. Instead, as Renfri put it, he took pity on her and merely raped her. She killed him by pushing her brooch into his brain through his ear while he had his pants down.

After that, the girl fled, going hungry and cold when she couldn't steal, swindle or sell herself for food and shelter.

Over the next four years she gained much notoriety, and came to be known Shrike because of her penchant for impaling her victims. She had also reached Mahakam and moved in with a band of seven gnomes. Meanwhile, Aridea had hired assassins to kill the girl, but each one of them failed in turn.

Shrike and her band robbed merchants, until one day when the gnomes argued amongst themselves so fervently none of them made it out alive. shortly thereafter, Renfri met up with the wizard, Stregobor, who'd "diagnosed" her in Creyden. He cast a spell on her which turned her into mountain crystals and buried her in the gnomes' mine, and brought it down upon her. Unfortunately for him, a prince found her, paid a hefty sum to reverse the curse which bound her, and took her home with him. Not long afterwards, Renfri left that kingdom with fresh blood on her hands.

She began hunting Stregobor, he fled several times, three times in Kovir, once in the Pontar Valley, once in Angren, and finally settled in down for a year in Arcsea, in Blaviken, she pursued each time, eventually surrounding herself with a new band.

Finally, in Blaviken, Renfri came the closest she ever did to getting her revenge. Alas, her plans were foiled, she died at the end of the witcher, Geralt of Rivia's blade. 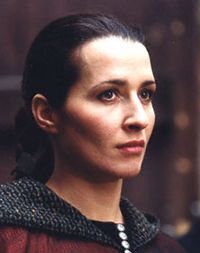 Unlike in the short story The Lesser Evil, in which Renfri's hair was described as 'straw-coloured' and her eyes the "colour of the sea", in the movie and TV-series her hair and eyes are very dark.

Also unlike in the books, Geralt first met her when she was struggling with three armored men ordered to kill her by her stepmother, Aridea. The men claimed she was a mutant and a witch. She fled the fight as soon as she could, leaving a dagger in the throat of one of the men and Geralt trying to save himself.

Later, Geralt met her again and after travelling together for a while, she joined the band of seven gnomes. Geralt left her with them, as per her wishes.

Years later, their paths crossed again when Renfri had put together a band of her own and spread terror and fear, amidst rumours of having murdered her stepmother and half-brother's father,. She burnt the temple of Melitele in Ellander as per Falwick's orders. As in the book, she died in a duel with Geralt in Blaviken.

Played by Weronika Pelczyńska as a child, and Kinga Ilgner as an adult.

In the premium module, Deidre Ademeyn looks much more like the Renfri described in the short story. Deidre's story quite closely resembles Renfri's and there are many other elements in the module which were taken from that same short story.