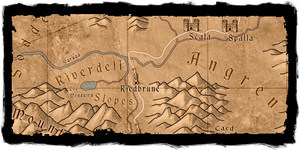 Riverdell (or Transriver) is a region south of Angren. It consists of the region south of the Yaruga river, north of Cintra, between Sodden and Amell to the west, Mahakam to the north. The Nevi runs through the area.

Ciri first fled to the forests of Riverdell during the sacking of Cintra.

After the Second Nilfgaard War, Riverdell was annexed by Temeria.

“
And this witcher, Sheldon Skaggs suddenly called out, this Geralt who loved Yennefer, has also bitten the dust, apparently. I heard he was killed somewhere in Transriver.
”
— pg(s). 13, Blood of Elves (UK edition)

“
But she reacted in a flash, instinctively — with a reaction she had learnt in the woods of Transriver when, escaping from Cintra, she had raced against death.
”
— pg(s). 150, Blood of Elves (UK edition)

Danusia Stok has used the name "Transriver" for this region in her translations of Sapkowski's work. In Time of Contempt, David French reverted to using "Riverdell"