The Scoia'tael are non-human guerrillas who fight against all humans in the Northern Kingdoms, opposing the discrimination against and oppression of non-humans. They are also known as the Squirrels, likely due to their habit of attaching squirrel puffs to their caps or other parts of clothing. Other theories suggest the nickname is popular because they live in the woods and subsist on nuts. Scoia'tael are first introduced in the series during the Blood of Elves novel.

Most Squirrels are elves, but some halflings and dwarves are among their ranks. Scoia'tael are divided into commandos (considered to be a gnomish term) comprised of several or a dozen fighters.

Bigger commandos are rare and formed only during battles or for special tasks (e.g. during the Thanedd coup). The best known formation was the Vrihedd Brigade, commanded by Isengrim Faoiltiarna, which used silver lightning bolts as its symbol. Scoia'tael were allied with Nilfgaard and used by Imperator Emhyr var Emreis for diversion, as well as support for the Nilfgaardian army. In exchange for their support, Imperator Emhyr var Emreis gave the elves Dol Blathanna as their own, independent state, and made Enid an Gleanna its queen. 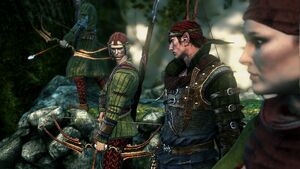 The book "The Feudal Society and Its Enemies" provides a journal entry on the Scoia'tael.

Scoia'tael is a name used by the rebels fighting for nonhuman freedom. In the common tongue it means"squirrels". As some would have it, it is because of squirrel tails that adorn the rebels' caps, or from the forest board they had to survive on. Scoia'tael formed units over a score strong, consisting mainly of elves, yet sometimes dwarves and halflings joined too. During the last war against Nilfgaard, the Scoia'tael fought on the side of the Empire, making diversions and great damage beyond our lines. Despite the provisions of the Peace of Cintra, many did not disarm and continued to fight, especially when it turned out that Nilfgaard sacrificed them in the name of peace and gave the units' leaders to the Nordlings to be executed.

Members of the Scoia'tael feature prominently in the The Witcher computer game. In Chapter IV, Geralt must make an important decision in taking certain paths, one of which, the Scoia'tael path, involves allying with the guerrillas in their fight against the Order of the Flaming Rose.