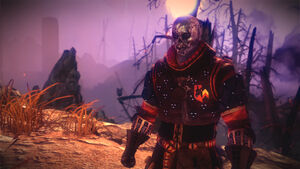 Seltkirk's ghost in The Witcher 2

Seltkirk of Gulet, was Demavend's champion, known as the invincible white knight, and Aedirn's finest swordsman. Many virtues were ascribed to him, with courage foremost among them. He was a true knight, the last of his breed and the hero of the previous war between Aedirn and Kaedwen, led by Vandergrift.

During that war, Henselt's troops crossed the Pontar the third day after the autumn equinox. Aedirn had good spies, so they were ready for them, and Seltkirk lined up his troops under the banners of Vengerberg, Aldersberg and Gulet along the hills. They decimated the Dun Banner and wreaked havoc among the Kaedwenis. Aedirnian hearts rose at the mere sight of his shining white armor.

Vandergrift cut Seltkirk off from the rest of his army. The two met in the middle of the melee. It was a battle of titans. Seltkirk allegedly just looked at his enemies and bowed ever so slightly. In the end, the Visitor hacked Seltkirk and sliced the white knight from his head to his groins. A terrible death that sent the Aedirnian ranks into disarray.

Earlier, in peace time, Seltkirk and Vandergrift had met at a tournament in Ard Carraigh. Seltkirk won then. Vandergrift's sword cracked and the Visitor had to yield.

Seltkirk also had a younger brother, Silgrat who was not nearly as famous as the glorious knight and always lived in the shadow of his great brother.

In The Witcher 2: Assassins of Kings, Seltkirk only appears as a wraith.