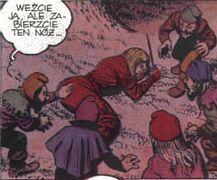 The seven gnomes were a robber band from Mahakam, which was joined by Renfri. Shrike and her band robbed merchants, until one day when the gnomes argued amongst themselves so fervently none of them made it out alive. After that, Renfri put together a band of her own.

While they were only mentioned in "The Lesser Evil" short story, and seen, in the passing, in the "Geralt" and "Mniejsze zło" graphic novels, as well as the third episode of The Hexer TV series, "Człowiek - pierwsze spotkanie" (Human — First Meeting). In the "Geralt" comic, one of the members of the band is Yarpen Zigrin, despite being a dwarf, not a gnome.

Expansion required
This article is too short to provide more than rudimentary information about the subject. You can help Witcher Wiki by expanding it.
Retrieved from "https://witcher-games.fandom.com/wiki/Seven_gnomes?oldid=188541"
Categories: