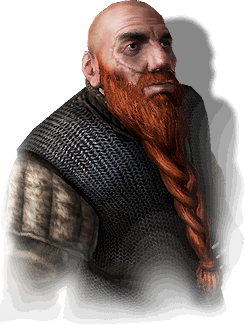 Sheldon Skaggs is a dwarf and one of the officers in the Mahakam Volunteer Army, a dwarven infantry unit. He is described as a powerful dwarf with an impressive beard reaching to his belt. He is a veteran of the Battles of Brenna and Sodden Hill. He got into an argument with Donimir of Troy at Dandelion's concert beneath Bleobheris.

Sheldon Skaggs is a main character in The Witcher 2: Assassins of Kings. He can be found in Vergen during Chapter II.

I met the dwarf Sheldon Skaggs for the first time, if I remember correctly, a few years back under the ancient oak Bleobheris, where I treated the local count-palatine and the public gathered in great numbers to hear my performance. Skaggs is a mighty warrior, straightforward like all his folk, plain of word, yet at the same time sensitive about his race, and especially the honor of dwarven women. As a veteran of Sodden and Brenna, where he fought as an officer of the Mahakam Volunteer Detachment, he appreciates songs of military and heroic deeds. He does not hesitate to express his appreciation through material means, thus disproving those who would portray all dwarves as misers insensitive to true art.