Witcher Wiki
Register
Don't have an account?
Sign In
in: The Witcher 3 bestiary, Creatures, The Witcher Adventure Game bestiary
English

Sirens are sea creatures which typically take the form of a half-human (male or female) with a fish's tail, very like mermaids or mermen. They appear to rule the undersea world and wield mysterious power. Their language is a sing-song variant of the Elder Speech. It is possible, but not confirmed that they can summon the dreaded krakens if the need arises.

The females are described as having flowing celadon-green hair, light green breasts with even lighter-coloured nipples.

Geralt can encounter hostile sirens on the shores of Skellige's islands.

Out at sea, if you hear a beautiful woman singing, turn the ship around at once. You understand? Even if it means sailing straight back into a storm.
— Arike of Hindarsfjall, advice given to his son before his first solo voyage

Like skilled hunters setting out wooden ducks to lure in drakes, sirens and lamias lure men near – using their own bodies as decoys. They can transform to resemble beautiful human maidens, though with tails covered in silver scales instead of legs. Once a naive sailor gets within arm's reach of these beautiful creatures, their fair faces suddently turn to fang-filled, fish-like maws, and lovely tails promising unknown delights become sharp, death dealing talons.

One legend claims sirens and lamias were once friendly towards men — and supposedly were even known (albeit on rare occasions) to accept some sailors' clumsy attempts at courtship. In our day, however, they are decidedly aggressive, perhaps soured by the numerous kidnappings of carried out by frustrated sea salts. Whatever the truth, one thing is certain: these days the monsters display no signs of good will, and so when spotting them one should immediately reach for one's silver sword.

Sirens and lamias (the sirens' more dangerous cousins) usually hunt in flocks, making use of their numbers as well as their ability to move effortlessly through water and air.

On the ground, however, they are virtually defenseless, and so a wise tactic is to damage their fin-like wings to force them to land. The Igni Sign also proves effective when fighting against them. Threatened or injured sirens will let out a terrifying shriek, leaving their opponents stunned while they escape – and their sisters swoop down for an easy attack. 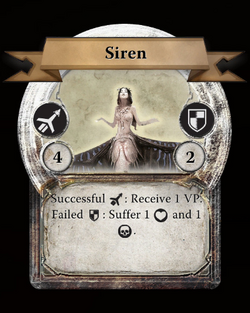 In The Witcher: Adventure Game sirens can cross your path.

To defeat the you need: