Siegfried gives Geralt this quest at the beginning of Chapter III. People have been disappearing in the cemetery and the Order would like to get to the bottom of it. They do not have the manpower to spare, so a witcher's help is required. 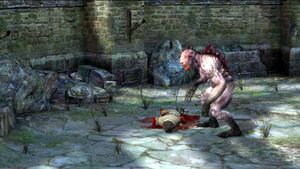 At the very beginning of Chapter III, Geralt finds Siegfried at his new post outside the Cloister, just up the hill from his old post. They chat and while catching up, Siegfried mentions that he could use the witcher's services to investigate the mysterious disappearances of townsfolk in the cemetery. Being the obliging soul that he is, the witcher agrees and heads over to the necropolis.

Once inside, he finds evidence of ghoul activity, but then finds more nefarious traces — the corpse of a woman has obviously been stabbed and not eaten. A few random encounters with some ghouls later and our hero comes upon a particularly unusual sight: a talking ghoul named Vetala. They chat and then our hero must then decide whether or not to allow the ghoul to live.

This concludes the quest.

The Commando / A Talking Ghoul

The Fight with the Elves / The Rescue