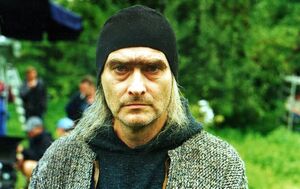 Stregobor is a Kovirian wizard and a master illusionist, as well as a staunch believer in the "the Curse of the Black Sun". He features in the short story The Lesser Evil.

He lived in Kovir for most of his life, serving under king Idi, together with the mage Zavist. There he also met Geralt; they didn't part as best friends. 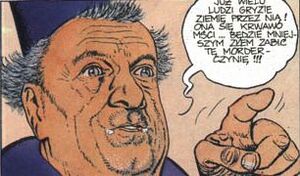 Some time later, Stregobor was sent to Creyden, because of Aridea's suspicions concerning her stepdaughter, Fredefalk's eldest child from his first marriage, Renfri. The wizard came to the conclusion, based on the girl's behaviour and nature, that she was indeed one of the sixty girls accursed by the eclipse.

In the TV series, Stregobor was played by Olgierd Łukasiewicz.

In the Netflix series[edit | edit source]

In the Netflix series, Stregobor is portrayed by Lars Mikkelsen. He appears in four episodes of Season 1 (2019):

Stregobor's role in the Netflix series is a bit more important than in the short story. He is introduced in "The End's Beginning", which is a retelling of the short story "The Lesser Evil".

Expansion required
This article is too short to provide more than rudimentary information about the subject. You can help Witcher Wiki by expanding it.
Retrieved from "https://witcher-games.fandom.com/wiki/Stregobor?oldid=426386"
Categories: