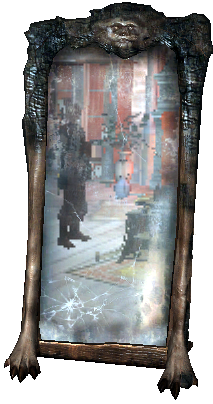 There are three telecommunicators depicted over the course of the game. Triss Merigold mentions that they can only be used to communicate over short distances. The three found in the game are: Triss' mirror, Hartmann's mirror and Azar Javed's mirror.

Triss' mirror is found in Chapter III, in the bedroom of her home in the Trade Quarter. As Geralt regains consciousness in the opening scene, Triss can be seen using her mirror to speak with another sorceress, most likely it was Keira Metz. This mirror is also a teleporter.

Hartmann's mirror is found at the Salamandra hideout in the restricted area of the Trade Quarter. The mirror is featured in a cut scene as part of the Lock and Key quest. It is only seen during one part of Chapter III and Geralt uses it on that one occasion to speak with Radovid (unless he forgets to do so...).

Geralt finds one last telecommunicator, Javed's mirror in the mage's laboratory in the catacombs of the old manor in Chapter V. It is through the discovery of this telecommunicator that Geralt learns who is truly behind the Salamandra organization.

It has been mentioned in the Witcher series that "Hartmann's mirror" may serve as a gateway to other worlds — both ways.