The Gargoyle Contract is the only contract quest in Chapter III of The Witcher 2: Assassins of Kings. See also the page on Rune rooms.

Gargoyle Contract
Let it be known far and wide that the sorcerers gathered in Loc Muinne seek a brave soul to rid the city of gargoyles. These beings pose a threat to the guests arriving for the summit, therefore they must be removed by any means possible. The person or persons who successfully fulfill this contract will be rewarded by the venerable Bras of Ban Ard and receive the gratitude of the Brotherhood. 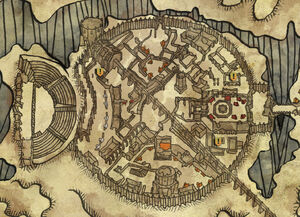 Location of the Rune rooms

Gargoyles are among the first monsters Geralt encounters as he enters Loc Muinne. They are all around the city, posted as guards and bound by magical seals which are in underground chambers, or "rune rooms". In order to get rid of the gargoyles once and for all, Geralt must deactivate each of the three seals by solving the rune puzzles in the underground chambers.

Merely killing the gargoyles is not sufficient to fulfill the contract, the seals must be deactivated as well.

Due to attacks by gargoyles living in the ruins, not many were willing to attend the Loc Muinne summit. The problem became serious enough that the sorcerers decided to hire a witcher. Luckily our hero was at hand. Geralt, as always, decided to learn more about the monsters through fighting them and reading learned tomes.

The witcher learned that gargoyles are magical creatures, posted as the city guards. They attacked anyone who entered an area protected by the spell. Finding and deactivating the magical seals that bound the gargoyles would be enough to solve the problem. Armed with a sharp sword and knowledge, the witcher started looking for the seals.

Geralt wore down the soles of his shoes and blunted his blade, but he got rid of the gargoyles. His reward waited in the hands of Bras of Ban Ard.

Bras of Ban Ard turned out to be a generous employer. The Witcher was pleased.