The Heat of the Day

The Heat of the Day is a quest which spans most of Chapter IV, in which Geralt initially meets a young bride to be, Alina, but then later must help her spirit find peace when she is tragically killed. 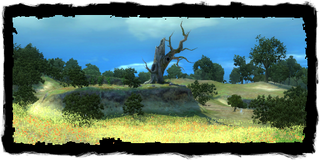 This quest finds Geralt in the midst of a village wedding. Is it not romantic? Alina is to marry Julian but her sister Celina is not very happy about it.

Celina loves Julian, Julian loves Alina, Alina loves Adam and Adam loves Alina, but Alina and Julian are to be married. Alina and Adam have been meeting secretly in the raspberry patch in the fields for who knows how long.

Adam is aware of Celina's jealousy of Alina's upcoming marriage to Julian, a rich merchant from Kovir. She has made no secret of her feelings and seems to be willing to tell anyone about it, Geralt included. Alina cries on Celina's shoulder about her lover Adam. This only serves to reinforce the feelings that Celina has; namely, that Julian deserves better than to be made a fool of by her sister. The sisters argue and Celina pushes Alina who falls to her death. The actual site of their confrontation is not explicitly mentioned but there are enough clues to suggest that they were at the top of the tower of the ruined mill as this is one of the places that the midday bride appears.

How exactly Adam comes to know of this event is unclear, but clearly he does find out and decides to avenge his beloved's death. He chases and then fatally stabs Celina. This stabbing is witnessed by Geralt who has been searching for the missing Alina in the fields at Julian's request.

When Alina died, she became a noonwraith but did not accept her own death. He meets her in her new form at the raspberry patch and her lack of acceptance of her fate is clear. The witcher must seek help, in the form of information regarding such situations. His best sources are Dandelion, Berengar, Lady of the Lake or the local soothsayer (Abigail or the Murky Waters healer). From them, he learns that Alina had a very special mirror, one of Nehalenia's Mirrors. To break the curse, Geralt must find this mirror which is in five broken pieces scattered throughout the fields (during the day) and have the pieces reassembled by either:

Now to deal with Alina... 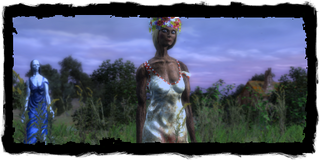 In either scenario, Alina is finally convinced that she is dead. She then explains that she can not leave, despite knowing her fate. She must reconcile with her sister, Celina before she can move on.

Then Geralt has the opportunity to save Celina who has become a nightwraith because of her actions. To save her, he must give her the Wreath of Immortelles.

Alina is preparing for her wedding but fears her sister Celina is showing a bit too much interest in Alina's fiancé, Julian. I'm not sure how this happened, but I promised to help Alina. I must go see Celina and Julian at the Inn.

The plot thickens. I met a young man named Adam, who is nice enough but who is also thoroughly infatuated with Alina, secretly in love with her, actually. I'll ask Dandelion to talk some sense into the boy... I should go see Dandelion at the inn.

Another chapter of our pastoral tale unfolds. Jealous of her sister, Celina is actively pursuing Alina's fiancé. But Julian seems indifferent to Celina, so I doubt the bride-to-be has much to worry about. I should see Alina and explain the situation.

Alina wasn't worried. As she states it, she trusts Julian, is sure of his feelings for her, and just wanted me to make sure he was all right. Women... I should find something else to do before they implicate me in the wedding preparations.

I've lived too much to ignore prophecies. Something wicked this way comes and Alvin foretold it. It will come soon, affecting those he holds dear. I must find Julian and warn him.

In the fields, I came upon a noonwraith that I think was Alina's ghost. The poor girl is dead. The noonwraith attacked me. Simply killing her will hardly put her to rest. I must talk to Julian. I must tell Julian that Alina has turned into a noonwraith.

I saw Adam murder Alina's sister, Celina. What drove him to do it? Either way, Julian must learn of Alina's death. Sad as it is, I must take the news of Alina's death to Julian.

Celina killed her sister out of jealousy, and Adam slew Celina when he learned of his beloved's death. I must take this sad news to Julian. I must tell Julian that Alina was killed by her sister, who is now dead as well.

A Mirror for the Noonwraith[]

I gave the mirror to the noonwraith. She stopped attacking me and seems to remember who she used to be. It wasn't enough to put her to rest though. I need to investigate further. Aren't there any shortcuts to this folk tale? I must continue looking for a way to put Alina's ghost to rest. (2000 XP)

The Dead Can Hear the Dead or A Ballad[]