The Source is a quest which is given to Geralt by Triss Merigold at the beginning of Chapter III. She asks him to place three sensors at each of three locations in the Temple and Trade Quarters to locate the source of some strange magical anomalies.

At the beginning of Chapter III, Triss gives Geralt three magic sensors and asks him to place them in some reliefs located around town. They will be used to triangulate the source of some strange magical anomalies she has recently noticed. Being the obliging soul that he is, he agrees to help her and heads out to find the reliefs in the Temple Quarter, cemetery, and Trade Quarter and place the spheres in each one.

The witcher then must find Triss to let her know that the task has been accomplished. Actually, he does not really have to say much as she already knows. She tells him about a child being kept at St. Lebioda's Hospital. That child, Alvin is a source and hence the origin of the magical anomalies. Triss wants Geralt to retrieve the child and bring him to her where he can be properly supervised and trained to control his wild magical abilities, but Shani is unwilling to release him. Triss points out that Shani is Geralt's friend and that he should be the one to make her see sense.

So it is off to the hospital, but just as he enters the Temple Quarter, Shani "greets" him with a few choice comments about Triss and asks him to leave the child with her instead. (She even goes so far as to say that she does not want the sorceress to get her "filthy paws" on Alvin) Geralt then continues en route to St. Lebioda's, but instead of Alvin he finds Dandelion, who tells him he has just witnessed Alvin being dragged away, kicking and screaming by some Salamandra types. He boasts that he followed them and found out where they have taken the boy, and that he can show the witcher the exact location. He then runs off to do just that, forcing the witcher to follow.

They leave the hospital and head for Little Mahakam, to a previously locked door across the street and just west of the dwarven blacksmith shop. There Dandelion pauses and asserts that he wants to actually help this time — he is devising a whole new genre: the pro-active ballad. Geralt points out that this would not be the wisest move, so the bard reluctantly agrees to "sacrifice" himself and stay outside while the professional deals with the bad guys. Geralt then enters the building, mercifully unaided by the bard.

Inside, there are a few assassins guarding the child. He kills them with his usual speed and finds Alvin. Dandelion then enters and Geralt tells him to take the child to either Triss or Shani which Dandelion does. Just then, a few more assassins enter only to be dispatched with equal speed. The witcher then exits the building and heads off to visit Shani, or Triss depending on his choice of guardian for Alvin:

He then heads back to whichever house Alvin is actually staying at. Now about Alvin...

Having satisfied his new-found "fatherly" duties, he is ready for some "quality" time:

So now our lucky witcher is saddled with a girlfriend and a dependent, thus ending the quest — poor Geralt!

Triss Merigold is examining some magic anomalies. She said something about me helping her. I should ask her what she meant. I should offer to help Triss.

Triss Merigold asked me to set three magic sensors in three places in Vizima: in the Trade Quarter near Town Hall, in the Temple Quarter by the entrance to the sewers and at the cemetery. Triss claims the anomalies are causing more monsters to appear in Vizima. The sensors should help us discover the source of these anomalies. I have to place the three magic sensors: one near Town Hall, another near the sewer entrance and the third at the cemetery.

When I left Triss's [sic], I ran into Shani. She claims Triss has dubious intentions towards the child. She asked me to bring the child to her. The boy is at St. Lebioda's Hospital. Shani wants me to take the child from the hospital and bring him to her. 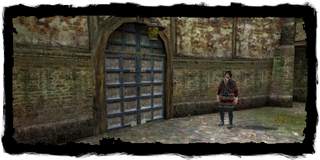 Alvin for Shani / Alvin and Triss[]