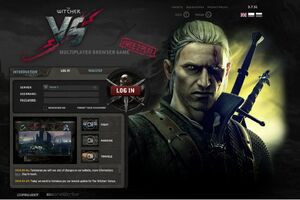 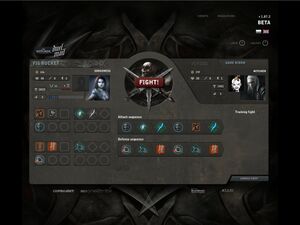 The Witcher: Versus (initially called The Witcher: DuelMail) was a completely free Flash-based multiplayer fighting browser game, developed for CD Projekt RED by one2tribe, that has you create a character from one of three classes and challenge other players to deadly battles. It has since been closed and is no longer available. The game has since been ported to iOS platform by one2tribe.

As of May 31, 2012 the relationship between CD Projekt and one2tribe and all involvement The Witcher brand ended.

When you first sign up for Versus, which is tied into your thewitcher.com forum account if you have one, you choose from one of three character classes: Witcher, Sorceress and Frightener. Naturally, you start out at level 1.

Each class comes with its own set of attacks and defensive maneuvers, which you will queue up as you challenge other real people. When your opponent receives the challenge, he/she queues up their set of attacks, magical spells and defensive maneuvers, then send their challenges to other players, who must create their own counter sequence in hopes of being the last one standing, and the battle plays out with motion-capture animations in a nice-looking rendered environment. 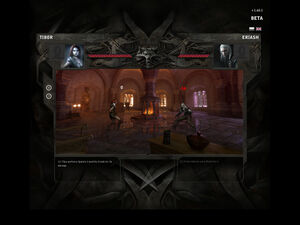 Winning consecutive fights against other real-world people gains the player experience which allows them to advance to higher levels of character development, along with gaining new skills. You will also earn orens (Temerian currency) to buy new items and weapons.

Since the game began, more features have been added. Players can now pay "real world" money to buy mandrake, which can be used within the game to buy alchemical items like potions, etc. Players who participate in special Versus events can also win mandrake.

Initially the game works as a bit of a rock-paper-scissors clone, expanding into something deeper as you gain levels and make your character more powerful. Player rankings are updated in real time, and you can even go back and review your own fights and those of others. Then use the handy email feature to challenge people who are not even signed up on the forums.

As of now online Versus game is discontinued and it is no longer playable on the website. A port to the iOS platform was released on Apple App Store in March 24, 2011 by one2tribe in partnership with Chillingo.