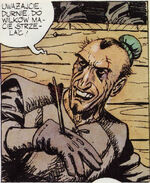 Treyse was a witcher who appeared in the graphic novel Zdrada (English: The Betrayal), the 6th novel in that series. He was the leader of the Cats.

Under cover of the exchange of trainees of both witcher schools he helped King Radovit to organise a plot against Wolves. However, during a tournament, when Cats and soldiers attacked Wolves, the King suddenly ordered his men to execute all witchers in the arena. Treyse got a shot in his hand, his further fate is unknown.