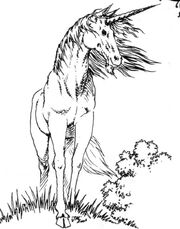 Unicorns are a race of sentient creatures that came to the world during the Conjunction of the Spheres. They look like horses with a single, often spiral horn in the middle of their foreheads. They use telepathy to communicate with each other and (sometimes) with other races. Unicorn horns are universal antidotes to poison and can be used to detect poisons as well.

Unicorns greatly dislike the Aen Elle who forced them to open the gate between worlds so that they might massacre humans from other worlds.

They also change colour with age. They can move between parallel realities, and they may also move through time (fourth and fifth dimensions).

The legends that suggest unicorns can only be captured by virgins are false. In reality they simply despise evil and so, avoid it. They usually appear to people with a good heart.