Vengerberg is the capital city of Aedirn and was one of the richest and most populous metropolies in the Northern Kingdoms. A long-distance trade center crossed by many routes and trails, it has a well-developed industry and education institutions. It is the home of famous sorceress Yennefer, Geralt's love.

According to some sources, Vengerberg had been founded by prince Venger in 8th or 9th century. It became seat of power of Aedirnian monarchs, like famous Baldwin of Aedirn or currently ruling Demavend III.

During the invasion of Dol Angra, Vengerberg was ransacked, with the Nilfgaardians slaughtering almost all what remained of its garrison and inhabitants: six thousands people who stayed in the city after evacuation. After peace settlement and the war's conclusion, the city slowly began to regain its former glory.

There is a mention of founder of the city in the 3rd issue of Biały Wilk (The White Wolf) magazine.

Vengerberg is presented on world map as city built on elven ruins, but Andrzej Sapkowski never mentioned this in the novels. The city could also be built on dwarven foundation or simply by humans from scratch.

The city is mentioned in Chapter II of the second game, and not only because of Prince Stennis' intentions to be crowned king there.

Succession is the topic of choice in about every inn in the country. I don't know for sure, but I think the hangman of Vengerberg was the last to claim the throne. 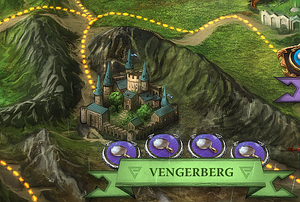 Vengerberg in "The Witcher: Adventure Game"

Vengerberg is a main location in the boardgame. It is marked with the witcher sign symbol "Quen"

Surrounded by high mountains in the west, north and east, its northern road leads to Ellander (northwest) and Dol Blathanna (northeast), while its southern route goes to Rivia.