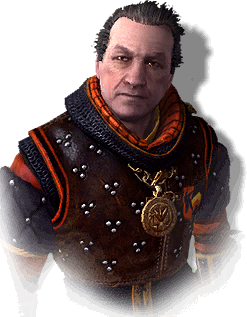 Vinson Traut is a secondary character in The Witcher 2: Assassins of Kings.

Later, while on the trail of the conspirators using the square coins, Geralt gains access to a trap door in the back of the prostitutes' tent in the camp followers' encampment. Below the tent, he finds the underground chambers of the old tower and inside, the man in a room with several henchmen. The two can fight it out, in which case Traut's remains contain the magical armor, an anti-Henselt pamphlet, a key to the Old Tower Cellar's door and some other loot (i.e. Superb Kaedweni jackboots, a First-rate Temerian sword).

The owner of Seltkirk's armor was an officer in Henselt's army. Suspected as an accessory to the conspiracy against the king's life, Vinson Traut was hiding somewhere.

Though Geralt wanted to solve things amicably, Vinson was less than eager to cooperate. On top of that, he decided to commit a fancy form of suicide – by attacking the witcher. Left with no choice, Geralt sent him to the great beyond.