A Reward for Brooches[]

The Messenger or Working with Leuvaarden[] 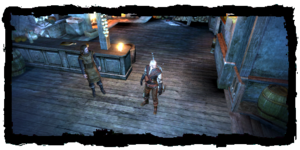